A relatively more recent technique and one of the two main techniques in removing dents is glue pulling. Simply put, by applying a special type of paint friendly glue specifically made for glue pulling and removing easily with adhesive remover and using a tab can offer an alternative to pushing to removing the dent.

Whether using glue pullers or slide hammers, the concept is to apply energy either quickly or slowly depending on how long the glue has been allowed to cure before glue pulling is applied. Obviously, a combination of glue pulling and pushing with tap down is used to move dents. More importantly, glue pulling was specifically developed to remove dents in hard or impossible to access areas that allowed pushing to be impossible. In some cases, this could have meant spraying the whole panel. 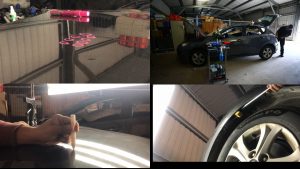 Register your interest in our PDR Course with dates